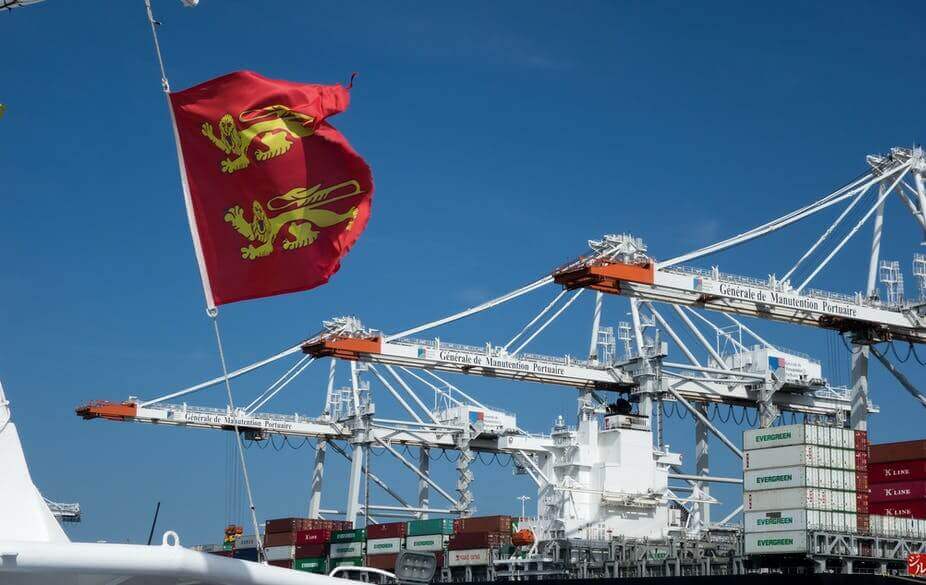 Normandy? Good reasons to consider the most “Nordic” region of France

With some large urban areas, extended agricultural space and the largest port complex in France, the region has both premium industrial and agricultural assets. Leader in the energy and agriculture sectors, some prominent Nordic companies are well-represented in Normandy; a region that has historical ties with the “Men from the North”, as its name implies. In this series about Normandy, we will unveil the potential of this territory, its strengths and the emergency measures taken to support its economy in the turmoil of the COVID-19 pandemic.

A strategic location oriented towards the international

From an economic standpoint, Normandy has diversified assets and a GDP of 93,4 billion euros, weighing more than 4% of the national GDP. Well industrialized and innovative in various strategic sectors, the region is widely open to the world thanks to its Haropa port system in Le Havre and its strategic location near Paris. As such, Normandy is a gateway not only to a market of 200 million potential consumers but also to all international markets. This makes it an important region in terms of international trade with 35% of the regional GDP generated by exports.

In 2017, about 3,600 companies made a part of their turnover through exportations, with half of them doing so since at least 2012. 73% of the region’s outbound trade is made in 6 key sectors: chemistry, perfumes & cosmetics, pharmaceuticals, petroleum products, transport material, food products and agricultural products. Certain sectors are especially thriving, as 16% of the foreign projects implemented countrywide are made in Normandy for the glass, wood and paper sectors, as well as 11% of the food industry sector. The region is also home to industry leaders, such as pharmaceutical giants Sanofi in Lisieux or GlaxoSmithKline in Evreux. Unsurprisingly, the EU countries represent the first economic partner of the region, with Asia and North Africa trailing behind.

Normandy is also focused on innovation with four prominent clusters in strategic sectors: the TES Cluster (e-health, e-tourism, e-administration and e-agriculture); the Mobility and Automotive R&D competitiveness cluster Mov’eo; the logistic cluster Novalog; and Hippolia, dedicated to innovation in the horse industry.

Normandy, a strategic location between London and Paris 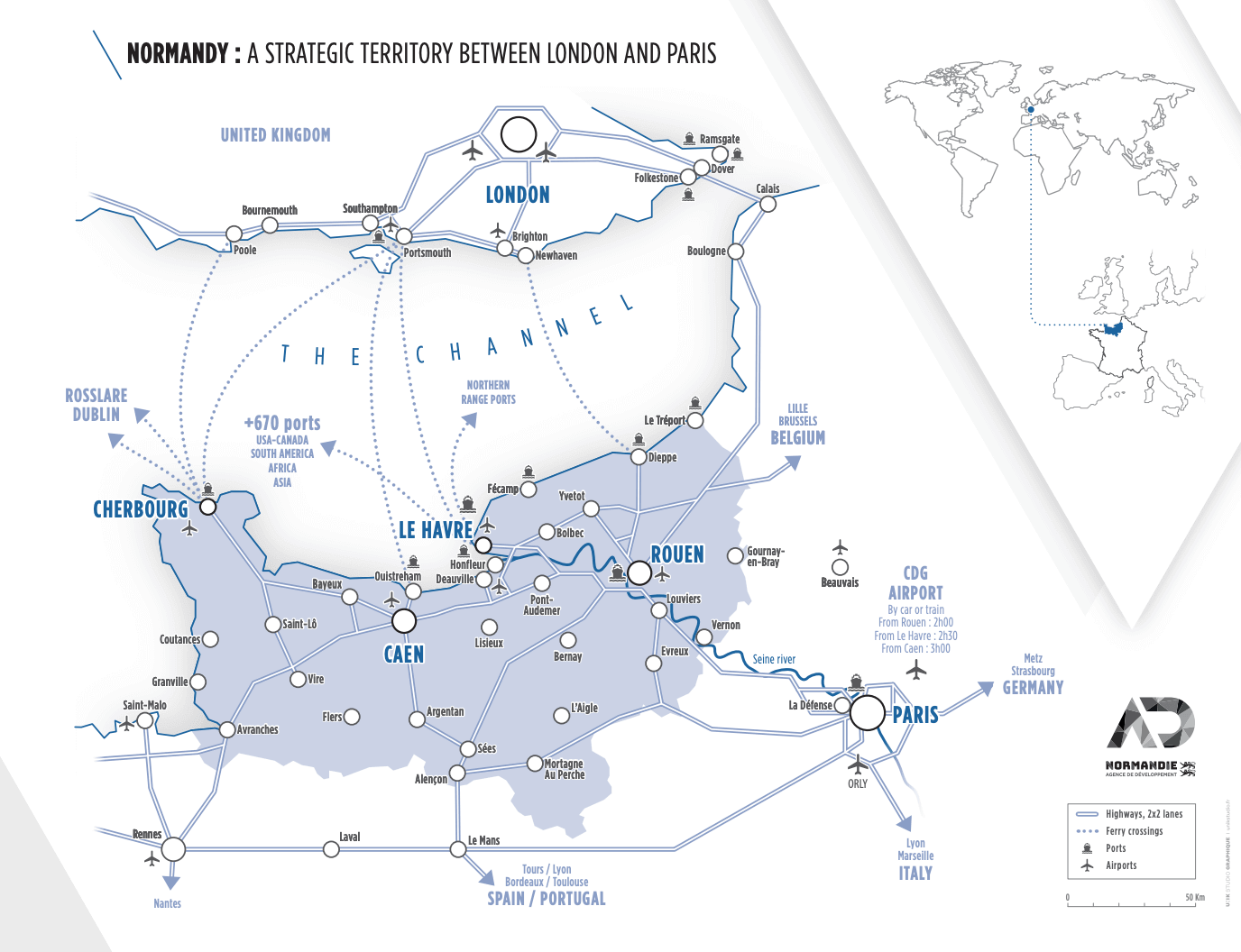 Amidst a thriving economy, the energy and agriculture  sectors stand out

Besides the Mont Saint-Michel, Normandy benefits from numerous assets allowing it to stand out in different sectors, whether traditional, niche or with high added value. Thus, the regional industry is strong in the automobile, petroleum and its derivatives, aeronautics, naval and nautical activities, pharmaceuticals, food industry, cosmetics, energy, the glass industry and the transport & logistics. Among all these sectors, the energy and agricultural ones stand out by their capacity to innovate and their strategic importance.

On the one hand, the unique energy potential of Normandy makes it one of the main actors of energy transition in France and in Europe. Of course, every large French energy company has a presence in the region, from Total to Areva and EDF. On one side, a third of France’s oil is refined in Normandy, mostly through the Total plant in Gonfreville-l’Orcher, which employs 1,500 people and handle up to 16 million tons of crude oil per year. On the other side, the region is at the forefront of the energy transition towards more sustainable sources of energy, especially those which use the power of the sea winds and currents. 3 of the 6 offshore French windfarms are in Normandy, which combined account for 220 turbines, producing 1,4 GW. The region can also boast the strongest sea current commercially exploitable, the “Raz Blanchard”, which is estimated to be able to provide up to 5 GW. The decision of Former Danish owned LM Wind Power, a wind turbine blade manufacturer that was acquired by General Electric in 2017, to build a 120 million euros production plant in Cherbourg is one of many illustrations of the potential of the region in the energy sector.

The region has also made the deployment and development of a hydrogen sector a priority. Therefore, it has launched the Normandy Hydrogen Deployment Plan that will benefit a regional support of 15 million euros to focus on applications from green H2 production to fuel cell recycling.

On the other hand, the food industry is the first employer in Normandy, with a strong focus on cereals and intensive farming. More than 25,000 people work in one of the 630 companies in the sector. In total, the food industry represents a revenue of 6,3 billion euros, of which around a billion is made in exportations. Normandy is the largest producer of milk, cheese, apples and sea food in France. One of the historic products of the region is apple cider, where more than half of the production is exported. The region has a very proactive approach to support its agriculture, cattle, fishing industries and much more. The two drivers are innovation and sustainable development, to allow the sector to remain at the very top of European and worldwide standards while maintaining employment. An example of these policies is the Center for aquaculture, supported by the region, which promotes new, innovative process for the local businesses of the sector.

The Normandy region has implemented a range of personalized measures designed to support the region’s companies and workers during the Covid-19 pandemic. These measures come in addition to the country-wide measures put in place by the French Government. For example, the region will participate to the Solidarity Fund, designed for the most vulnerable workers. Normandy will contribute up to 10 million euros per months to the one-billion euros per month Fund.

Read More : A national plan to support workers and companies against Covid-19

At the regional level, the bulk of the measures concerns treasury issues:

The Solidarity fund is starting to support small businesses and artisans of the Region, that have less than 1 million euros of yearly revenue and that lost 70% of their revenue in March 2020. They will receive a set amount of 1,500 euros, with an eventual 2,000 euros additional grants if they face funding difficulties.

Contact the regional development agency AD Normandie for guidance in your investment project or to get support for Covid-19 related issues.

Lisa Gautier founded Hackyourcloset.com in Stockholm in 2019 with the idea of changing the apparel industry for good. After an accelerated growth in...